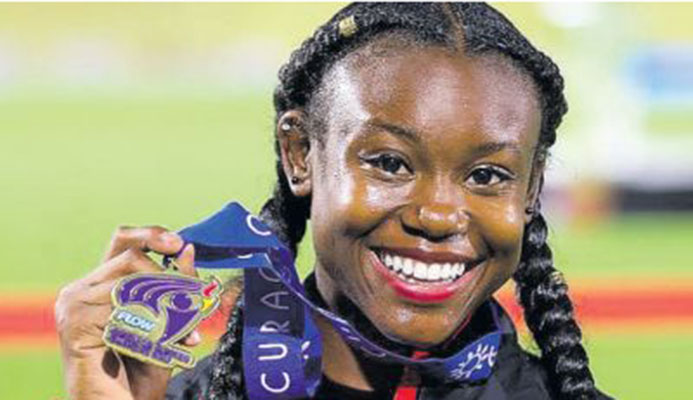 Our youth athletes performed admirably on the local, regional and international sport stages in their respective disciplines.

In honour of their achievements Sports Reporter JONATHON MATOUK goes back into the record books to entertain you one last time as the year closes of what they have achieved in 2017 while flying the red, white and black national flag of T&T.

Already a household name in T&T having risen to prominence in 2015- and again in 2016, St Fort had another stellar year in track and field, winning multiple medals in local and international competitions.

Her final season as a junior got off to a phenomenal start as she raced to the sprint-double at the Flow Carifta Games, winning the 100 (11.56 seconds) and 200 metres (23.99) sprint titles.

But despite those successes and another in the 100m dash at the NGC National Association of Athletics Administration (NAAA) Junior Championships seemed a scratch on the surface of her potential which she proved when racing among the best in the Americas and adding yet another gold medal in the 100m event at the Pan American Under-20 Athletics Championship.

After Keshorn Walcott put the field back in Track and Field as far as T&T is concerned, a young brigade of athletes have began to emerge, including Tyriq Horsford. The Tobago-born athlete stamped his name vividly in 2017 by winning a handful of medals in all colours in international competitions including at the Flow Carifta Games, breaking his previous games record of 73.00m, with a colossal throw of 76.50m, which was good for gold. The 17-year-old stand out athlete ended the season with a strong performance at the Commonwealth Youth Games, capturing a silver medal in his pet event from a very competitive field.

Johnson registered an amazing feat in chess when she created history for T&T by becoming the country’s first-ever woman Grandmaster Norm, and the youngest International Master in the English-speaking Caribbean at the age of 16-years-old at the Central America and Caribbean Chess Championship.

US-based Gittens had a phenomenal overall year in track and field for T&T. At the Flow Carifta Games she amassed 4,854 points to secure the Girls Open Heptathlon title, and Girls Under-20 long jump gold with 5.94 metres, respectively.

She continued her dominance of the heptathlon event at the international stage, winning gold at the Pan American Combined Events Cup and she shattered her own national junior heptathlon record in the process recording 5,490 points. The 19-year-old rounded off an exceptional season, winning a bronze medal in the long jump contest at the Pan American Under-20 Athletics Championship, and narrowly missed out on a medal in the heptathlon event.

If St Fort is the crowned princess of local sprinting, then Colthrust is the prince.

He continued his rapid ascent by achieving outstanding medal hauls in multiple local and international competitions.

The 17-year-old made light work of his challengers at the Flow Carifta Games, winning gold in the Boys Under-18 100m (10.64 seconds), then dominated the NGC NAAA Junior Championship before he saved his best performance for the Commonwealth Youth Games in the Bahamas, where he raced to T&T’s first-ever gold medal at the Games, winning the 100m behind a run of 10.55 seconds.

TT Triathlon Federation (TTTF) executive member Karen Araujo has been elected to one of two positions available on the Association of Commonwealth Triathlon (ACT) board.…
in TRIATHLON
Read More

A maximum of two Caribbean countries will be able to compete at Birmingham 2022 where women's cricket is set to make its Commonwealth Games debut.…
in CRICKET
Read More

Carter to take Xmas break, then full charge to Tokyo Games TOP Trinidad and Tobago swimmer Dylan Carter rated his performances as some of the…
in SWIMMING
Read More

DEREK Daniel has been elected as president of the TT Triathlon Federation (TTTF), with Karen Araujo as his deputy, Mandisa Leacock taking on the role…
in TRIATHLON
Read More

Jereem joins Lyles in Florida camp Jereem “The Dream” Richards has switched camps, and is now training in Clermont, Florida, USA under the watchful eyes…
in ATHLETICS
Read More

Aquatics clubs struggling to survive in Covid uncertainty. Months of lack of income but still being committed to paying recurring maintenance, rental costs and salaries…
in SWIMMING
Read More